Stacy Keibler tied the knot with new hubby Jared Pobre unexpectedly over the weekend. Read on for the details on the couple’s wedding

1. It Was a Beach Wedding

The ceremony was intimate on the beach in Mexico and Keibler described it as their “love day” to People:

We both felt strongly that our ‘love day’ should be intimately special, and that’s exactly what it was. It was a blend of romance, tranquility, natural beauty, bonding and overwhelming love.

USA Today reported that the wedding was actually a surprise for family members who were vacationing with the happy couple.

2. Keibler Gave a Heartfelt Statement About Her Love for Pobre

Upon marrying Pobre, Keibler released an amazing statement to People about her marriage to Pobre saying:

My happiness is indescribable! Marriage is the ultimate bond of love and friendship. It means putting all your faith and trust into a person that you can’t help but believe is your soul mate. Someone who has all of your best interests at heart; someone handpicked for you, to help you grow and be the best person that you can be. Jared is all of this for me.

This is the first marriage for both Pobre and Keibler.

3. Apparently They’d Been Planning the Wedding for Months

Congratulations to Stacy Kiebler and Jared Pobre who have just tied the knot! http://t.co/EQJMhxB5RE pic.twitter.com/OVVeNWouOH

People reports that the couple had been planning their wedding for quite some time:

Although the small wedding was a joyful surprise for family members vacationing with the couple, Keibler and Pobre have been quietly planning the low-key celebration for several months.

4. Pobre and Keibler Were Friends Before They Got Together

The two lovebirds started dating in the fall of 2013 and have actually been friends for 5 years.

5. The Groom Is a Tech Entrepreneur

Apparently, Pobre is very successful millionaire as the CEO of the company Future Ads, a private interactive firm he started in 2001. By 2009, it was one of the fastest-growing interactive companies in the country. 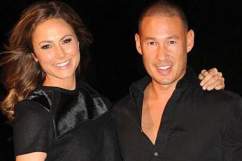