Tonight is the 6th season premiere of the Real Housewives of New York and we’ve got a new housewife on our hands. Read on for the facts on newbie Kristen Taekman.

1. Kristen Taekman Is The New Housewife This Season

Taekman is a gorgeous mother and wife who has a deep affinity for “the king,” Elvis Presley. As for her children, Taekman has two – a five-year-old named Cash and two-year-old Kingsley. In 2009, Taekman launched her own high-end greeting card box company called 2nd Street Press, so she has her own success in addition to her husband’s.

As far as some fun miscellaneous info on Taekman, we can tell you this … She has three tattoos, she can’t cook, she’s very superstitious, Halloween is her favorite holiday and she drinks hot herbal tea all day.

2. This Housewife Is a Model

Kristen began her modeling career at age 14 after being discovered by John Casablanca’s agency. She went on to work in New York before moving to Paris for several years, followed by Italy and Australia. Gracing the covers of some of the world’s most renowned fashion publications, Kristen has appeared in Australian Vogue, Harper’s Bazaar, and Glamour as well as national campaigns for beauty brands such as L’Oréal and Clairol.

In addition, we will apparently be seeing Taekman in work mode this season as we get to witness at least one of her modeling photo shoots.

3. Brandi Glanville Is One of Her Good Friends

Real Housewives of Beverly Hills spit-fire star Brandi Glanville is reportedly a very good friend of Taekman’s. In fact, we get to see the two out to eat this season on the RHONY. Too Fab reports that:

Kristen is a longtime friend of Real Housewives of Beverly Hills star Brandi Glanville, who she credits with helping her get the gig on the Bravo show.

4. Her Relationship With Her Husband Isn’t Perfect

Taekman’s hubby Josh is a successful businessman for the natural energy supplement EBOOST. He also used to be the vice president of marketing for Diddy’s Bad Boy Entertainment. The couple has been married for 10 years and, according to the show this season, Josh receives sexual favors when he buys her nice jewelry … Isn’t that the way a lot of married couples operate though?

And, like most couples, the two have their squabbles. Taekman talked about her relationship with Buddy TV explaining that:

We fight, we bicker. We have a two and a five-year-old. So, you know, we’re still changing diapers. And my daughter still gets up some nights. And that just really weighs heavy on us as a couple. And then towards the end of the season, I decided that our bickering is our personal form of flirting.

Reportedly, Josh proposed to his long-time wife in the Sheep Meadow at Central Park.

5. Breast Implants Were Reportedly One of Her Anniversary Gifts From her Hubby

Some women get jewelry on their wedding anniversary and others get breast implants. Taekman is apparently a boob girl. On a podcast with BFF Brandi Glanville, Taekman joked:

First year is diamond, somewhere along there is paper and nine years is silicone … I’ve had two kids and breastfed. I needed new ones. They look and feel so much better … I had the cutlets for the longest time. I burned those puppies the second I got the real thing. 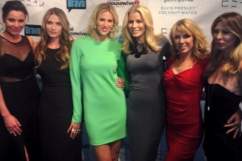