Lindsay Lohan’s new reality show premieres at 10 p.m. on March 9, 2014 and by the looks of this trailer video, it’s going to be a bumpy ride. So far, it seems the series will be showing all the issues that production ran into when trying to work with Lindsay. Lindsay’s show will be airing on Oprah Winfrey’s network OWN, so at one point of the show, Oprah actually steps in to talk to Lindsay because things were getting out of control. All in all, Lindsay admits that she often is guilty of self-sabotage and talks about the battles she fights within herself. Have a look at the first look video to see what Lindsay has in store for us with her new reality series. 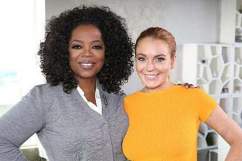