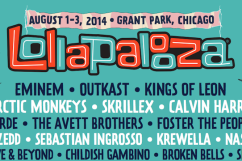 The headliners lineup for Lollapalooza 2014 has been revealed via a poster the festival organizers released, a day before the official announcement of the full-lineup.

The 2014 Lollapalooza dates and location are August 1 to August 3 in Grant Park, Chicago.

The message that greets users who log on to Lollapalooza.com.

According to the poster, and Chicago music insider Greg Koft, the headliners are:

Eminem
Skrillex
Kings of Leon
and
The Arctic Monkeys

The names have not been confirmed by the festival organizers, but they haven’t been denied. Greg Kot had the names of the 2013 headliners before the official announcement in last year, too.

After some quick research on each of the four 2014 headliners’ tour dates for the summer of 2014, only The Arctic Monkeys have a date that conflicts with Lollapalooza. The English rockers are in Montreal on Friday, August 1, which would leave them plenty of time to get down to Grant Park for either August 2 or 3.

Both Kings of Leon and Skrillex will be finishing their tours just before Lollapalooza. Eminem still has shows scheduled in L.A., Canada, New York and Detroit in August.

Three-day passes for the concert are sold out, but on March 26 at 10 a.m. you can purchase one-day tickets here. 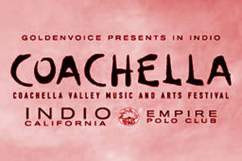