Matthew Rhys has been impressing audiences with his wide range of roles. In his career he’s played Romeo, a homosexual lawyer, and a KGB spy. The 39-year-old is still single, but has had his share of relationship drama. Here’s all you need to know about the 39-year-old Welshman who stars in The Americans.

1. There Are Rumors Matthew Rhys Is Dating Keri Russell

don't watch the americans you end up looking through matthew rhys and keri russell's photoshoots pic.twitter.com/sZ9nrxOABN

As of late, he’s been fending off rumors that he’s dating his co-star Russell, who announced her split from husband Shane Deary in December. Even his own mother believes them and has called her son for confirmation. He told People:

She calls up going, ‘What’s going on? I just read this about you.’ I tell her, ‘You have to take off your Google alerts.’

In The Americans, the two play KGB spies living in Washington, D.C., in the ’80s.

To be cast in the show, the pair had to do a chemistry read. The director instructed Russell to slap him, and it’s become a tradition ever since.

Yeah, that’s an old tradition that’s been upheld from the last season. It goes back to the audition, the first audition that I had, the chemistry read that I had with Keri where she was told by Gavin O’Connor, the director, to slap me in the scene, completely unbeknownst to me, and did incredibly hard, and has consequently continued to do so in two seasons now. It’s happened several times. She likes to do it at inopportune moments, or when she thinks I’m least expecting it.

The show is such a hit that after only four episodes, it was renewed for a second season. It’s currently at the start of its second season on FX.

2. He Dated Sienna Miller, Who Went on to Date His On-Screen Brother

Rhys dated his The Edge of Love co-star Miller. In the film, he played Dylan Thomas, and Miller played the poet’s wife Caitlin.

He told the Daily Mail in 2008 about their breakup:

Sienna is so fun loving, a real free spirit, which comes from not really caring what other people think. But, unfortunately, classic things came between us, like distance. We spent so much time apart.

There was quite the love triangle when Miller went on to date Rhys’ Brothers and Sisters’ costar, Balthazar Getty.

The two men played brothers on the show, and according to E Online’s report at the time, they were no longer on speaking terms.

The word quickly spread of the affair after photos emerged of a topless Miller kissing a married Getty in Italy in July of 2008.

3. He’s Best Known For Playing a Gay Man in ‘Brothers and Sisters’

In an interview with the Paley Center, he dished on what attracted him to the role:

It was the writing that was the huge, immediate draw. I hadn’t read a pilot like that in many years.

He also spoke about the positive way the show dealt with homosexuality:

There was this beautifully written character and sexuality absolutely wasnt an issue nor was it his defining characteristic as far as his identity went. I loved the interaction with the family towards Kevin. It’s not an issue; it’s human in a way.

This new role in The Americans is a big departure from what he was doing in Brothers and Sisters.

In Brothers & Sisters, an action sequence was opening a bottle of wine. I enjoyed the change in pace because the difference in parts was like night and day. I’ve never done action or anything like that so it was nice to be considered for it.

The Americans is filmed in Brooklyn’s Gowanus neighborhood.

Rhys and and Russell live there, close to the set.

People magazine spotted them together in the Brooklyn Heights neighborhood a few days before Christmas.

A source told the magazine, “They looked very much like a couple. They were laughing and walking closely together.”

He’s loving his New York home and told stylecaster that he’s in a “love affair” with the city:

At the moment there is NOTHING I don’t like about New York. I’m firmly in the middle of my love affair with this city and am continually acting out cliched moments of all the things I’ve seen in films.

He also gave a shout-out to the women in the Big Apple, saying, “New York women have a great sass.”

5. He’s a Welsh Man Playing a Russian Pretending to Be an American

picked up on the crazy fact based on his The Americans character.

Rhys told Salon.com about the confusing situation he’s in, which makes him slip up on his accent:

Ha, my fake, phony accent. It’s sort of glorious. If, at any time, the accent slips, you can go, “Oh, you know, I’m not American.

He grew up in South Wales and told Stylecaster about his humble beginnings:

I grew up in the pretty sh*tty city of Cardiff, South Wales. It’s the capital of Wales (UK) and great place to grow up. However, I soon bolted at the age of 18 to London to study at the Royal Academy of Dramatic Art.

In London, he had his turn with Shakespeare, playing Romeo with the Royal Shakespeare Company in 2004.

The still-single Rhys revealed that his mother would love to see him with a Welsh girlfriend.

In an interview with the Daily Mail, he told the paper about the possibility of settling down one day.

Yes, you hit a time in your life when it starts to feel like the natural thing to do. But I’m not with anyone, so that’s the one lacking element at the moment. I think my mother would be very happy if I found a nice Welsh girl. 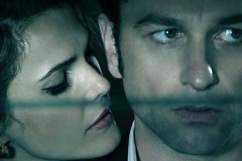