Over the past year, Hollywood has lost some legendary & extremely memorable stars, including James Gandolfini, Philip Seymour Hoffman, Paul Walker, Cory Monteith, Harold Ramis, Shirley Temple Black, and Peter O’Toole. These are celebrities who have touched our hearts through their amazing work, their achievements, and through their reputations as good-hearted souls. First on the list was James Gandolfini, with stars including Eileen Brennan, Roger Ebert, Joan Fontaine, and Harold Ramis to follow.
Ending with Philip Seymour Hoffman, Bette Midler appeared on stage to sing an emotional rendition of “Wind Beneath My Wings.”

As a special treat in memory of some of our lost legends, have a look at the below Oscar clip of two great stars we lost this year – Annette Funicello and Shirley Temple. In the video, Shirley Temple presents Funicello with the Honorary Award to Hayley Mills at the 33rd Academy Awards, hosted by Bob Hope. 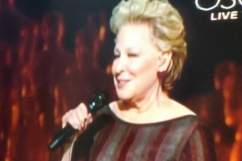 WATCH: Bette Midler’s First Ever Performance at the 2014 Oscars