Rain couldn’t stop music artist Pitbull this morning. Pitbull and his sexy dancers were supposed to perform outside for the people of Manhattan, but the rain caused a problem.

Despite the weather, the Today Show moved his outdoor concert inside and brought some of his freezing fans indoors to enjoy his performance.

First on the agenda was a performance of Pitbull & Kesha’s hit song “Timber.” After his performance, Pitbull thanked fans for his Hollywood Reporter title as a “don.” Pitbull was also named as a Playboy ambassador and Pitbull talked about his appreciation for Hugh Hefner. 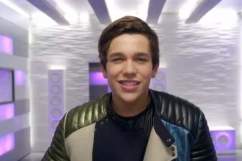 The reason for Pitbull’s appearance with GRL today is to promote his new music video titled “Wild Wild Love.”