Tonight was the season 6 premiere of the Real Housewives of New York City and things were just as juicy as always. Have a look at the full recap and highlights from tonight’s episode below:

1. Ramona Is Dealing With Her Daughter Leaving For College

With three weeks to go in school, Ramona’s daughter Avery will be graduating and she’s having a rough time. With Sonja’s daughter being 13 years old, Ramona warns her to hold on because the time goes very quickly once they hit their junior year in high school.

2. Everyone Wants to Avoid Aviva

Clearly, Sonja and Ramona are still upset with Aviva Drescher from last season when she called them “white trash” and berated them. Not only are Sonja and Ramona anti-Aviva, Carole and Heather have been distancing themselves from Aviva also. Well, Carole is mainly distancing herself because she didn’t like the negative way Aviva acted at her party last season.

3. Sonja Is Juggling Men as Always

"sometimes Sonja has to go commando..what can I say" crying that is the best housewives intro ever @Andy @SonjatMorgan

Sonja Morgan has always been in the dating game as long as she’s been a housewife and she’s quite good at it. In the premiere episode, she talks about her many men and even says she’s been dipping in the under 30’s pool. Sonja even brings her boy toy of the moment, Ben, to Heather’s birthday party.

Heather has a birthday party and apparently used to work with new housewife Kristen’s husband Josh Taekman through Bad Boy Entertainment. Taekman is a sexy blonde model and is delightfully outspoken. To find out more about Taekman, click the below links: 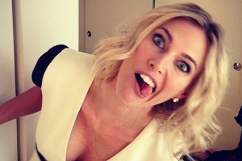 5. Aviva Hits It Off With Kristen

How much do we already LOVE @KristenTaekman already?? #RHONY

Aviva shows up to Heather’s birthday party and talks to new housewife Kristen first, giving her compliments on her looks and Kristen loves it … Who wouldn’t, right? As far as Carole, Aviva tells her that she’d like to pick her brain because she’s writing a book and wants Carole’s advice. Since Carole is an author, Aviva wants some input on the memoir she’s writing, but Carole felt a little awkward about it.