Robin Thicke has been very vocal lately about trying to win back his estranged wife Paula Patton. At several of his concerts, he’s professed his love for Patton and wanting to get back together. On February 27, 2014, TMZ reported that Thicke wore his wedding ring on stage and told this to the crowd:

For y’all that don’t know — me and my wife separated, but I’m trying to get my girl back. She’s a good woman.

I liked a @YouTube video http://t.co/QqspTuXuG8 Robin Thicke Is Trying to Win Paula Patton Back

On this past Sunday night, Thicke was performing in Atlantic City, New Jersey and an audience member shouted out that they love Paula Patton. Thicke responded saying, “I do too.” He then opened up about the importance of love and family in an emotional speech, according to E! News. 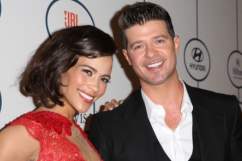