After years of speculation, the public now has confirmation that Sonny Moore, aka Skrillex, was raised as a Scientologist. In Rolling Stones’s March cover story about the 26-year-old EDM artist, Skrillex speaks about his childhood in the church of Scientology, defending members as being “attacked by the press,” and saying the people in the church “are my homeys.”

In the interview, Skrillex also talk about aliens and God, saying:

I think it’s a fun approach to say, Maybe God was aliens, and they put us here and we learned technology from them. The whole thing is really fascinating. Why not look to the stars? Look beyond this, accept that there’s so much we don’t know and a lot of it could be up there. We’re gonna have this technology in our lifetime. It’s cool to think about. Why not? There’s a ton of astronauts and people at NASA who have spoken about alien existence for years — you don’t see it publicized. 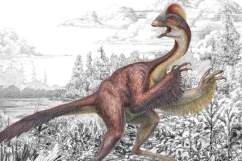