After the recent announcement of Stacy Keibler’s unexpected nuptials with hubby Jared Pobre, it seems that there’s even more big news to tell. According to Page Six, Stacy Keibler is pregnant.

Pictures of their nuptuals appear in this week’s People magazine, with no mention of the pregnancy. The photos for the People spread are carefully posed, apart from one picture on the contents page which reveals a sizeable bump.

Page Six further reports that Keibler’s reps have declined to comment on the alleged pregnancy. 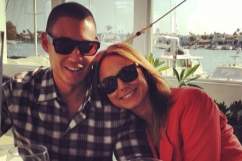