Did George Clooney get engaged to girlfriend Amal Alamuddin? Here are the facts on the new future Mrs. Clooney and how George reportedly asked her to marry him …

1. Alamuddin Was Supposedly Showing Off a Big Ring to Cindy Crawford

Clooney, 52, and his girlfriend, 36-year-old lawyer Amal Alamuddin, were spotted having dinner at Nobu in Malibu Thursday night with friend Cindy Crawford, and multiple sources confirm that they saw Amal showing off a ring to Cindy, the wife of Clooney’s business partner Rande Gerber, sparking rumors of an engagement.

2. George Clooney’s Rep Would Not Comment on the Engagement Rumors

Whether Clooney is in fact engaged or not, his team is staying silent. A rep for Clooney told ET that:

Even though Clooney’s rep had nothing to say on the matter, People has confirmed that the couple are engaged.

George and Amal are trying to keep things very low-key but they also aren’t really trying to hide this, it doesn’t seem. I think it’s like they want the people they love to know that this is real, that they plan on being together forever.

3. Rumors Are That Clooney May Have Popped the Question in Mexico

Us Weekly reports that George Clooney is rumored to have asked Alamuddin to marry him while vacationing in Cabo San Lucas, Mexico.

4. A Source Spotted the Couple “Toasting Their Engagement”

Further sources report that a witness saw Clooney and Alamuddin celebrating the big news in Hollywood. Us Weekly writes:

On April 23, the twosome were then spotted dining together at Craig’s restaurant in West Hollywood — and, according to one onlooker “they were toasting the engagement.” The infamous Hollywood bachelor even told a fellow diner that they were engaged, the witness claims.

5. Clooney Is Supposedly Happier Than He Has Ever Been

A source opened up to Us Weekly to talk about Clooney and Alamuddin’s relationship, gushing about how happy Clooney seems.

This is the healthiest relationship I’ve ever seen George in. He seems incredibly happy, and Amal is such a sweet and intelligent girl, who has her own thoughts and ideas and doesn’t just bow down to everything he says. 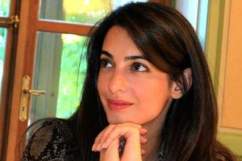