Reportedly, rapper A$AP Rocky has popped the question to supermodel Chanel Iman and she has accepted. Read on for the facts on the couple as well as Iman’s fiance.

1. The Couple Have Reportedly Been Keeping Their Engagement a Secret

Yesterday, Page Six reported that Chanel Iman and A$AP Rocky were engaged and they were “keeping it quiet.” The couple has not let the cat out of the page yet. The two lovebirds have been dating just over a year. 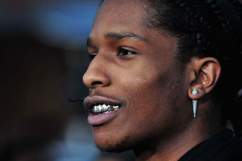 2. Only Recently Have A$AP Rocky and Chanel Iman Been Spotted Publicly Together

For most of the couple’s relationship, A$AP Rocky and Chanel Iman have reportedly tried to keep their love out of the spotlight. Hollywood Life reports:

Rocky and the former Victoria’s Secret model have been linked together since early 2013, though they’ve managed to mostly keep their relationship out of the headlines. Just recently though, they’ve begun stepping out together. Rocky and Chanel hit the red carpet of an event at Gustavino’s in February, they’ve been arm-in-arm at recent New York Knicks games, and they were actually seen kissing on the red carpet of the MTV VMAs in August.

3. Former Flame Iggy Azalea Got a Tattoo of A$AP Rocky

A$AP Rocky started dating female rapper Iggy Azalea in late 2011, but the relationship ran its course and ended in the summer of 2012. In the meantime, Azalea got A$AP Rocky tattooed on her fingers saying, “Live.Love.A$AP.” This is why we try not to tattoo our significant others’ names on our bodies, ladies and gentlemen.

4. The Rapper Once Admitted to Being Gay?

A$AP Rocky allegedly admitted to being gay in a video clip. However, the only thing that actually came out was that the clip was edited to make it seem as though Rocky was saying he was gay. Here’s the video.

5. Rihanna and A$AP Rocky Had a Fling

When A$AP Rocky was the opening act for Rihanna’s “Diamonds” tour, Rocky and Rihanna were said to have had a fling. Reportedly, they were spotted kissing during a video shoot in August 2013, according to Hollywood Life. A source revealed:

There is no dating relationship happening between the two, but they are definitely sleeping with each other. He’s like a brother to her, they’re cool.