Philanthropist and musician Sir Bob Geldof is dealing with the tragic death of his daughter, Peaches.

She was found dead on April 7.

In a statement today, he said:

Peaches has died. We are beyond pain. She was the wildest, funniest, cleverest, wittiest and the most bonkers of all of us. Writing ‘was’ destroys me afresh. What a beautiful child. How is this possible that we will not see her again? How is that bearable?

Here’s what you should know about Bob Geldof, Peaches Geldof’s father.

1. He Was Twice Nominated for the Nobel Peace Prize

The Irish native was nominated for the 1986 Nobel Peace Prize for his work on Live Aid. The initiative earned $100 million for African famine relief.

Then, in 2006, he got a nod for his role in the Live 8 concerts, held in 2005 and watched by 3 billion people. The festival was held to celebrate the 20th anniversary of Live Aid.

One hundred fifty bands and 1,250 musicians played in the name of poverty.

Over 30 million people from all around the world gave us their names for the live8 list which was presented to Tony Blair, as chair of the G8, by representatives of LIVE 8 and the Global Call to Action against Poverty.

2. He Co-Wrote ‘Do They Know It’s Christmas?’ for Band Aid

In 1984, he and Midge Ure wrote the iconic song to raise money for the famine in Ethiopia.

Band Aid, a charity group of American, British and Irish musicians, recorded it in 1984 in London.

It went on to become the biggest selling single in UK Singles Chart history.

Live Aid, a concert in 1985, came after. It was held in the UK, and thought up by Geldof to raise funds for the same charity as the single.

After Live Aid, he told Daily Mail, he became a celebrity:

I was uncomfortable with that cult of personality. Old ladies coming up and bursting into tears. It really isn’t normal. And people stuffing fivers in my pockets. Now, of course, I’d keep them but back then it was too weird and it had to stop.

3. He Was in a Popular Punk Band

Geldof performs as lead singer of The Boomtown Rats, circa 1980. (Getty)

His band, The Boomtown Rats, was named after a gang in a Woody Guthrie novel. According to their site, they were the “biggest band in the UK during the late ’70s to early ’80s.”

They all shared a house in Surrey. Geldof explained it to the Daily Mail:

Band and roadies and wives and girlfriends and “special new friends” all living together. Shagging in every room. Bedlam.

Back after 26 years..THE BOOMTOWN RATS! Fronted by the legend that is Bob Geldof…We can't wait! pic.twitter.com/4pvvnpIB

He split from Peaches’ mother, Paula Yates, in 1995. At the Hay Festival in 2011, he said, “I couldn’t get beyond the huge immensity of loss — that universal grief. Pain crowded in my head. I couldn’t find a way over or beyond it.”

Yates left him for INXS lead singer Michael Hutchence. Yates died of a heroin overdose, and Hutchence died in an autoerotic asphyxiation accident.

At the festival, Geldof talked about his new love of 15 years, French actress Jeanne Marine:

The soul … gradually gets stitched back together and something resembling a human being gets reconstructed – in this case, me.

Marine is best known for her role in Braveheart.

5. He Starts Speeches With, ‘My Name Is Bob & I’m a Private Equity Whore’

His multimedia company, Ten Alps, employs more than 500 people. He also has 8 Miles, a private equity company that invests in Africa.

People can also pay money just to have lunch with him. 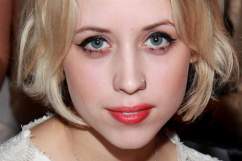 Read More
Celebrities, Music, Peaches Geldof, R.I.P.
Bob Geldof is mourning the death of his 25-year-old daughter, Peaches. Here's what you need to know about the famous musician and philanthropist.