Columbus Short is involved in his own real-life Scandal just in time for tonight’s season finale.

His wife, Tanee McCall-Short, filed for divorce after claiming he threatened and physically abused her.

Here’s all you need to know about the 33-year-old actress and dancer and her abusive relationship with this alleged creep.

1. She Just Made a Breakup Movie With Him

The couple shared the screen in The End Again, which is about their characters ending a six-year relationship.

The short film, which is only 16 minutes long, has not yet been released. The film’s tagline is, fittingly, “When it comes to live, is it ever really over?”

In the film’s press release, he talks about his relationship:

Working with my wife, Tanee, was great. We have natural chemistry. When in a relationship, you have lots of things to draw on to make it feel more real.

Watch the trailer above.

2. Her Husband Allegedly Threatened to Kill Her

TMZ reported that Tanee claims Columbus Short held a knife to her throat on April 7 after coming home drunk.

According to her claims, Columbus pinned her to the couch and began choking her, with a knife in hand, threatening to harm her.

In February, he was arrested for attacking his wife in front of his children. He pleaded not guilty to the charges.

3. They Have a Daughter

The couple are parents to a 2-year-old daughter, Ayala.

On Arsenio, Columbus spoke about his daughter, whom he and his wife have decided to raise bilingual (Spanish and English).

Columbus also has a 10-year-old son with his ex-wife, Brandi Short. He split with Brandi after he had an affair with Britney Spears in 2003.

4. She Filed for Divorce Two Times Before

When Tanee filed for divorce last week, citing irreconcilable differences, it was her third time attempting to legally end the marriage. Here two previous divorce filings, one of which came on September 11, 2013, were withdrawn.

In the new filing she demands sole physical and legal custody of their little girl.

5. She Danced on Beyonce’s Tour

Her IMDB page refers to her as an actress and producer.

She starred in Burlesque, The Losers and You Got Served.

If you’re in an unhealthy relationship, seek help. Call the National Domestic Violence Hotline at 1-800-799-7233. 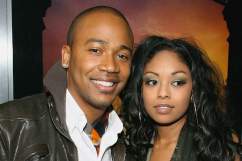 ‘Scandal’ Star’s Wife Says He Threatened to Kill Her: 5 Fast Facts You Need to Know