The first two artists who were announced as safe on The Voice tonight were Josh Kaufman from Team Usher and Kat Perkins from Team Adam. Next on the “safe list” were Kristen Merlin from Team Shakira, who suffered technical difficulties on the live show last night, and Audra McLaughlin from Team Blake. 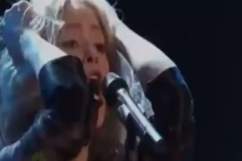