Jill Duggard of 19 Kids & Counting is engaged and we’ve got the scoop on her engagement as well as some info on her fiance, Derick Dillard.

1. The Couple Was Introduced Through Duggar’s Father, Jim Bob

Jim Bob told People how he decided to fix up Dillard and his daughter:

I had gotten an email from Derick a few years ago and gave him my phone number so he could share the work he was doing in Nepal. I was impressed with him as I got to know him over the years. He sounded like an amazing young man. I felt like from the beginning, they had similar personalities and goals. I thought they would hit it off.

So, what did Jill think of Dillard when she first spoke with him?

I was really impressed with his character and I was surprised how much we have the same vision and life goals. He’s a great guy.

2. They Had a “Global Romance”

The way that Duggar and Dillard got together is very interesting. Duggar told People:

I am so happy. Our story is so very unique. The first time we talked, he was in Japan, we met in Nepal, he spent time in India and Israel and then came back to Arkansas where he met my family. We have a very international story even though we live so close.

Apparently, the couple fell in love quite quickly and Duggar stated:

We got to know each other in the first few months pretty quickly. I was in love with someone I had never met in person, but we really knew each other well.

Dillard, an accountant, only has one sibling and joined a crew with 19 kids, but he told People that he enjoys coming into such a big family:

We have a large pool of chaperones. You have to come in armed with good jokes and I usually have Skittles as well. It has been such a huge blessing to get to see her a few times a week.

4. Dillard Thinks His Relationship With Duggar Is a Dream Come True

When asked about the couple’s engagement, Dillard said:

I feel like I’m dreaming. It was great to grab her hand for the first time.

5. They Will Share Their First Kiss on Their Wedding Day

That’s right. The Duggars have very strict values and Jill Duggar was only allowed to hold Dillard’s hand once they were engaged. They will not kiss until their wedding day. 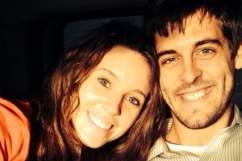