On tonight’s episode of Saturday Night Live, the Grammy-nominated Ed Sheeran performs as the musical guest while Seth Rogen hosts the show. Let’s get to know Sheeran a little better with these 5 Fast Facts.

1. Sheeran Used to Sing in the Church Choir

Sheeran used to sing in the local church choir at age four and up. Later, he learned guitar and started writing songs at high school. According to Wikipedia:

His early childhood memories include listening to Van Morrison on his trips to London with his parents and going to an intimate Damien Rice gig in Ireland when he was eleven. He is a patron of the Youth Music Theatre UK. He was accepted at the National Youth Theatre as a teenager.

Ed Sheeran and Taylor Swift have made music together, toured with one another and are really good friends. Check out the above video as Sheeran dishes on his friendship with the girl he calls “Swiftie.”

Sheeran has not only written music with Taylor Swift, he’s also done the same for her ex-boyfriend Harry Styles and the rest of the One Direction boys. In fact, he became quite friendly with the band, but Swift didn’t seem phased.

3. His Next Album Is Due Out This Summer

In a sad, but very touching story, this month, Sheeran sang over the phone for a 15-year-old fan dying from complications of cystic fibrosis. She died in her sleep minutes later. Her name was Triona Priestly and when her friends realized she had little time left, several of them began tweeting #SongForTri to try to get Ed Sheeran’s attention. They were hoping to lift the sick teen’s spirits … The Independent describes the night as this:

Sheeran sang his song “Little Bird” to Priestly and she passed away shortly after at peace.

4. Jamie Foxx Initially Spotted Sheeran at a The Foxxhole

In the spring of 2010, Sheeran flew to Los Angeles with no contacts in the industry and played open mic nights all over the city. Wikipedia writes that one night:

He was spotted at The Foxxhole by Jamie Foxx, who was so impressed that he offered Sheeran the use of his recording studio and the run of his Hollywood home for the rest of his stay. Throughout 2010, Sheeran began to be seen by more people over the internet through YouTube and his fan-base grew, with him also getting credit from The Independent newspaper, England football captain Rio Ferdinand and Elton John.

Even before he was famous, Sheeran had the backing of Hollywood elite.

Sheeran beautifully sang the song “In My Life” at the 50th anniversary tribute show for The Beatles. Have a look at his fantastic performance. 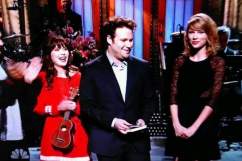 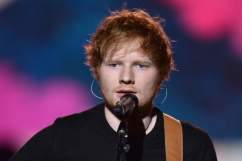