After last week’s Game of Thrones Purple Wedding debacle, what will happen to the void left open by the open thrown? Will the king’s untimely demise cause another armed struggle for power? Let’s see on tonight’s episode “Breaker of Chains.”

Here are the top 5 highlights:

Looks like Tyrion has made one too many threats to his malevolent queen-regient sister, because he is immediatly accused of killing the boy-king Joffrey. Tyrion is a smart man, but is he smart enough to talk his way out of this one? Even with his famous brother supporting him, Cersei is a dangerous person to cross.

After years, since season 1 to be precise, of being tortured and manipulated by the cruel king and his court, Sansa Stark is finally free of King’s Landing. It only costs poor Dontos his life after the conniving Baelish comes to set her free. What will her life be like now that she doesn’t have to be perpetually watching her back in the capital?

Game of Thrones has never shied away from showing less than consensual sexual interaction, but this one may take the cake as one of the most disturbing. After repeatedly turning down her brother/lover’s advances, Cersei now tries to rekindle the romantic side of her and Jamie’s relationship in the room where King Joffrey’s corpse is being displayed. In the moment, she asks Jamie to kill Tyrion, the man she’s accusing of killing her son. One may say she was trying to use her sexuality to manipulate Jamie into doing her bidding, but my goodness does Jamie loose his mind and scare every viewer during that scene. So much for being a hero.

4. Tywin Tries to Makes a Truce With the Martells

After all of the talk of revenge and hating the Lannisters, Oberyn Martell has given in to the political savvy of Tywin and has agreed to become one of the king’s trusted advisors and help out with the trial of Tyrion. From all we know about Oberyn thus far, he must be up to something, because I don no believe he would willingly ever help the Lannisters. This must be a revenge plot in the works.

The smarmy charming gambler Daario Naharis was chosen to represent the queen in single combat, and what combat it was. With all the swagger of Han Solo, but with the fighting skills of season 1 Jamie Lannister, Naharis takes out the champion of Meereen in less than 10 seconds. Daenerys’ army becomes more formidable and badass each episode. 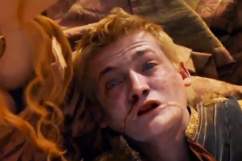