The former glee club is loving their time in New York. But in this episode, the friends must unite in the face of a senseless attack on one of their own.

Here are some highlights of the episode, including the songs you’ll be hearing in “Bash.”

This scene was so sad and so beautiful at the same time ! #glee #klaine pic.twitter.com/vhjwSevymt

The incident occurs after Kurt tries to help a victim of another attack in a New York alley.

Mercedes, Artie, Sam, Blaine, and Rachel all rush to be by his bedside. Although he is bruised, the doctor says he is on the road to recovery.

Blaine has some alone time with his fiance and sings him a rendition of “Not While I’m Around” from Sweeney Todd.

Kurt’s dad, Burt, also returns, and is angry with his son for stepping in and risking his life.

2. Sam Tries to Get Romantic With Mercedes

Sam is lounging on the couch watching The Facts of Life due to a bout with insomnia. Mercedes joins him on the couch, and after some flirting on Sam’s part, she starts kissing him.

Amber Riley as Mercedes sings “Colorblind,” to Sam, which is actually the actress’ new song in real life! In the above video, she debuted the single on The Queen Latifah Show.

The diva is having her doubts about rekindling the old flame, especially after her backup singers express their disapproval.
One actually calls Sam, ““a white, unemployed dude she met in her high school Glee Club.”

Here are the touching lyrics, which parlay quite nicely to her on-screen relationship with Sam:

At the end of the episode, the couple announces that they are officially back together.

Whoopi Goldberg reprises her role as the NYADA dean.

The Broadway actress asks for time off from Funny Girl to complete her studies.

When she gets scolded by Dean Tibideaux that she doesn’t have enough of a foundation to become successful, Rachel responds by dropping out of NYADA.

4. The Friends Attend a Candlelight Vigil

Kurt, Blaine, Sam and Rachel gather to remember a friend who was assaulted because of his sexuality.

As the group walks in a procession, they sing Into the Wood’s “No One is Alone.”

Later, they gather at the apartment for dinner, and speak candidly about how hate crimes still exist, even in a progressive city such as New York.

Kurt finds out that Rachel dropped out, and confronts her about it over dinner.

After he tells her that she made a grave mistake, Rachel gets defensive.

At the end of the episode, the two rekindle their friendship, and declare their love for one another. 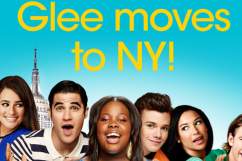