Last week, Glee tackled the subject of gay bashing, when Kurt stepped in to defend someone who was being beaten because of his orientation, and wound up getting hurt himself.

This week, the show is back with another sensitive topic as Artie gets diagnosed with an STD.

Life in New York is not turning out to be so easy for the Gleeks… but they ease their sorrows rocking out to some classic 80s tunes on “Tested.”

1. Artie Is Diagnosed With an STD

As the name of the episode implies, the boys all get tested after discussing it at go to Serendipity 3– a popular ice cream destination in Manhattan.

In this episode, we learn that Artie is sleeping with two of his classmates-Jessica, a punk rocker, and Vanessa, a philosophical redhead. He sings “Addicted to Love,” by Robert Palmer, along with his girlfriends.

When he learns that he has chlamydia, he freaks out, realizing that it may hurt his chances with a future mate.

When he confesses the news to the gang, they are shocked. Blaine advises Artie to tell his two partners.

As we know, there’s been in trouble in paradise for the engaged duo in New York.

Blaine has a new obsession with a food craze in the city, the cronut, which was introduced by Dominique Ansel.

As a result, he’s gained weight, and is worried it will affect his relationship with Kurt.

In class, the pair sing “Love Is a Battlefield,” by Pat Benatar as an ode to their relationship.

At the end of the episode, Blaine confesses that he’s intimidated by how successful Kurt is becoming, and feels that he will fall out of love with him. Kurt assures him that he will always love him, and the two embrace.

Sam stuns Mercedes by informing her of the STD test.
“In order to give you everything, I have to make sure I dont give you anything,” he says, to his girlfriend.

Mercedes responds by telling Sam she has never had sex and isn’t ready to sleep with him.

Although Sam respects his girlfriend’s wishes, he still tries to convince her.

The pair go to church together, where Mercedes sings a heartfelt rendition of “I Wanna Know What Love Is,” by Foreigner on the altar.

4. The Boys Tape a Video For STDs Dressed as Sailors

At the start of the episode, the boys film a service announcement.

Hey boys! Did you know there’s an epidemic in this country? Well, there is and it could be hiding in your trousers. Remember get tested for STD or America will end up R.I.P.

Mercedes tells Sam she’s prayed about it, and come to the realization that she wants to have wait until she’s married to have sex.

Sam seemed surprised and leaves the apartment to think.
Mercedes is touched when she returns home to find candles and an understanding Sam, who says he can do without sex, but not without her. 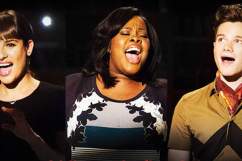