6. This is Only the 2nd Godzilla Film Produced by American Movie Studios

This 2014 reboot of Godzilla counts as the 2nd attempt by American studios to produce a film on the familiar Japanese monster. The 1st American film studio produced version of Godzilla came in 1998, a movie that was lambasted by critics and fans alike. This version of the franchise was directed by Roland Emmerich and co-written alongside Dean Devlin.

The movie studios responsible for the production of Godzilla (1998) were Centropolis Entertainment and TriStar Pictures.

Back in August 2004, the beginnings of this 2014 Godzilla reboot started to come to fruition. Japanese film director Yoshimitsu Banno secured Godzilla’s movie rights from Toho in order to produce a new film that was ready made for IMAX 3D. This film’s original title was known as Godzilla 3D to the Max, which was meant as a remake of Godzilla vs. Hedorah.

As the years passed since the announcement of Banno’s acquisition of the movie licence, it was also announced that American cinematographer Peter Anderson and American movie producer Brian Rogers joined the project. As time passed, the movie began running into financial issues that put the movie in limbo.

Originally, rumors began to surface regarding the final release date of this new Godzilla film – 2012. In August 2009, news began swirling around Legendary Pictures meeting up with Toho in order to produce this new film. In October 2010, a new set of rumors began making the rounds – movie director Guillermo del Toro was being approached by Legendary Pictures in efforts to make him the director of their new Godzilla film.

After those aforementioned rumors were proven untrue, an official reveal on the film’s real director came in January 2011 – Gareth Edwards was selected for Legendary Pictures’ upcoming Godzilla film. As the development time for the film began to take shape, 2012 arrived. The planned release date didn’t come to pass, which made the movie transition into its final release date of May 16, 2014.

9. This Will Be the 1st Godzilla Film Property Produced by Warner Bros. in a Very Long Time

Warner Bros. Pictures hasn’t gotten their hands on the Godzilla movie property since their release of 1959’s Gigantis, The Fire Monster. In Japan, the movie goes by a different name (Godzilla Raids Again). As for the American rendition of the film, Godzilla’s name was changed to “Gigantis,” plus the monster’s roar and origin story was entirely changed for U.S. audiences.

10. Novels, Toys and a Video Game are Being Produced on Behalf of the Film

With the release of a huge film comes the flood of awesome merchandise to come along with it. Bandai America have already produced a line of toys that focus primarily on the 2014 film designs. Science-fiction book writer Greg Cox has been tagged as the author of a novelization of the film that will see a release in May 2014. Two separate books (a children’s book titled Godzilla: With Light and Sound! and and art book called Godzilla: The Art of Destruction) have also been scheduled for release.

One week before the film’s official release, a tie-in comic book entitled Godzilla: Awakening will offer readers a prequel storyline look at Godzilla’s rebooted universe. As for the video game side of Godzilla’s merchandising efforts, a match-three mobile puzzle game called Godzilla Smash3 is being developed by Rogue Play.

Prepare for Godzilla 2014 by checking out the big lizard’s Criterion film installments! 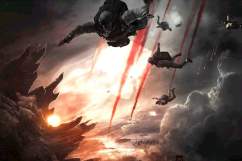