It was just reported on the live show of The Voice that Gwen Stefani & Pharrell Williams will be joining the cast of judges on The Voice next season. Read on for the full details.

1. Christina Aguilera Let the Cat Out of the Bag

So excited to have you join #TheVoice squad @GwenStefani! Welcome to our crazy fam! Kisses- xoxo #blondesdoitbest

Though it hasn’t been officially announced, judge Christina Aguilera posted a tweet last night that revealed Gwen Stefani to be joining The Voice.

2. Stefani Will be Replacing Aguilera

According to many reports, Aguilera will be taking time off from the show to focus on her personal relationships and children, so bringing Gwen Stefani on would be a great replacement.

3. Rumors of Stefani’s Joining the Show Have Been Swirling for Weeks

What is it about selfies? Gx pic.twitter.com/5nBledkCUX

There has been tons of speculation surrounding Stefani’s possibly joining the team. Many reports said that contract negotiations were the hold up.

Alright! It's official now! Welcome our friend @gwenstefani to #thevoice !!!!!

While none of the current judges have commented on the news of Stefani becoming a judge on the show, Adam Levine did post a tweet about it when the rumors first started. A week ago, Levine told Us Weekly:

She would be a really good addition to the show if she were to be on it, but that’s only a rumor as of now.

I’m a huge fan — she’s a wonderful human being, and I love her to pieces. She’s so talented. She’s just great.

5. Stefani Isn’t the Only New Judge on the Show

With Aguilera’s exit and Cee Lo’s exit, the show was in need of more judges. According to Us Weekly:

Pharrell Williams has officially signed on as a coach for season 7 of the show, and original cast members Levine and Blake Shelton have yet to make announcements as to whether or not they’ll return come fall.

What’s really interesting is that Stefani and Pharrell Williams both appeared together on stage at Coachella. Whatever the case, hopefully our favorite bromance doesn’t jump ship. The Voice wouldn’t be the same without Adam Levine and Blake Shelton.

Feels good to be out of the cave #Cochella2014 @Pharrell gx 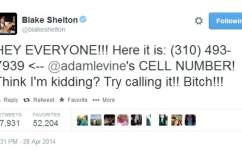 Read More
Celebrities, Celebrity Tweets, Celebrity Twitter, Christina Aguilera, Gwen Stefani, The Voice, Twitter
Gwen Stefani and Pharrell Williams are the new judges to be added to the judging panel on "The Voice." Read on for what we know ...