Hannah Davis is making waves as a Sports Illustrated swimsuit model. Besides her body, she is known for her famous boyfriend, Derek Jeter.

The island native was only 14 when she was discovered by a Ginny Edwards photographer while she surfed in the Caribbean.

Here’s what you need to know about the 23-year-old.

1. She’s on and off Again With Jeter

The Yankee shortstop started dating Davis in 2012, after his breakup with Minka Kelly.

Back in February, Page Six reported that Jeter was back with her after a brief hiatus.

The paper also claimed that the athlete has a habit of breaking up with his girlfriends when they start getting famous.

A source told the paper:

Derek likes to keep his relationships quiet. In the past, when his girlfriends become famous and start doing sexy shoots, that’s when they break up. Exactly the same thing happened with Minka and Vanessa Minnillo.

2. She Has a Hard Time Getting Into Clubs

Her family is originally from New Jersey. In the 2014 Sports Illustrated Swimsuit Edition, shown above, she wore a cut-off T-shirt with the slogan “NJ Strong.”

She moved to New York after graduated to focus on her modeling career. “I’m very happy with my decision,” she said.

However, she’s from St. Thomas in the Virgin Islands. This proves difficult for her when she tries to go out at night. The model claims that bouncers reject her because of her fake-looking ID from the island.

“I’m like an old lady,” she told GQ, about her choice to refrain from partying.

Being in the magazine was something Davis always aspired to.
“I’m in Sports Illustrated. That was a goal of mine as an athlete, and now, as a model. So I feel very, very lucky” she said.

She told Page Six that she uses her assets when she is photographed:

I work with what I got, which is a lot of arching of the back and boobs forward. There’s a lot that goes into these pictures.

She’s also the face of the Ralph Lauren fragrance Ralph Rocks and has also modeled for Victoria’s Secret, Tommy Hilfiger and L’Wren Scott.

The first time she saw herself in an ad was for Ralph Rocks at an airport. Her immediate reaction was quite surprising:

I was so embarrassed. I was like, ‘Oh my gosh, what are the kids at school gonna think?’

4. She Quit Modeling for Tennis Once

As a teenager, she was playing competitive tennis. She told Sports Illustrated:

I was playing on the junior Caribbean tennis circuit. I quit when I was about 18-years-old. I was traveling throughout the Caribbean and then I was going to these national tournaments in the summer all over the U.S.

At one point, she had to halt her modeling to make time for the sport.
She said, “Eventually I had to quit modeling because I was trying to balance modeling and tennis at the same time. It was a struggle. I had my coach coming with me to fashion shoots and it was all mixed up.”

The interviewer of Davis for the NFL said she knew Davis’ brother. He told her:

Hannah’s graduating high school and we’re not sure what she’s gonna do. She might play pro tennis, she might go to NYU, or she might model.

As for her inspirations in tennis, her favorite player of all time is Andre Agassi.
She gushed:

I grew up watching [Andre] Agassi. I just love him. I love hits spirit and he’s just a really entertaining player.

5. She ‘s the DIRECTV Genie

In the above commercial, she shows up in a living room as two men watch TV.
Many men have taken to Twitter to express their content that she is representing the service provider.

I just did my research and found out the models name in that direct tv commercial is Hannah Davis.I think I'm in love pic.twitter.com/STLqrfRD 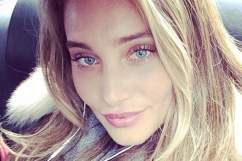