James Maslow certainly makes Dancing With the Stars worth watching this season. Check out all the facts on Maslow’s dating past, the bullying he endured during his childhood, his band, and some hot pics.

On the very first episode of season 18 for Dancing With the Stars, Maslow surprised his dance partner Peta Murgatroyd, who had no idea who she was paired with. When Peta first sees James, she is shocked and almost upset with him for not texting him with a warning of some kind. Apparently, the two dated and then James left for his tour and that was that we guess. Have a look at the awkward clip in the above video.

It has been confirmed that James Maslow (23) and Peta Murgatroyd (27) from Dancing With The Stars are dating. pic.twitter.com/JjyP8X1nqI

The two have shown some chemistry so far, but there’s no telling if the duo will pick up where they once left off … 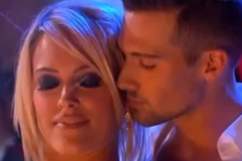 WATCH: James Maslow Heats Things Up in the ‘DWTS’ Ballroom

2. Bullying Was Prominent in Maslow’s Childhood

James Maslow may have a drool-worthy body today, but he grew up on the heavier side and was bullied for his weight. In an interview with People, Maslow revealed:

Everyone has their challenges growing up. I’ve definitely had quite a few of them, and it’s cool to be able to share that with people. I haven’t really talked about it in a long time.

Maslow then talked about how he likes to try to stay more postive, saying:

I don’t dwell on it. I’ve really moved past that and turned it into a positive thing. But it was nice to reflect back and just remember. Even I, at times, forget and try to live in the moment. We all came from somewhere.

3. Maslow Has Climbed the Tallest Mountain in the United States

In an interview I did with James Maslow for MF Magazine, Maslow talked about one of his great accomplishments, climbing Mt. Whitney. Mt. Whitney is the tallest mountain in the continental U.S. and Maslow made it to the top during a brutal winter.

It was one of the greatest few days of my life. It was in early June of ’09 and they had more snow that week than ever before. Though it should just be a long hike, my team and I had to blaze out our own trail with ice axes and crampons from 12,600 feet up to 14, 505. Reaching the top and signing the book felt better than I can explain.

4. Big Time Rush Is What Maslow’s Most Known for

Big Time Rush started off as a television show and featured a boy band, which was also called Big Time Rush. The band was made up of and is still made up of James Maslow, Kendall Schmidt, Carlos Pena Jr., and Logan Henderson. Check out the band’s music video for their hit song “Windows Down.”

5. Maslow Had a Bar-Mitzvah Even Though His Mother Was Catholic

You asked for it another pic of @jamesmaslow at our photo shoot! pic.twitter.com/etmu4KBo

Technically, by Jewish law, James Maslow was born Catholic because his mother is Catholic. However, Maslow’s father is Jewish and Maslow was raised Jewish. According to Wikipedia:

Maslow was born in New York City, New York, and raised in La Jolla, California. His father is Jewish and his mother is Catholic; he was raised Jewish, attended Hebrew school six days a week during his childhood, and had a Bar Mitzvah. He has described himself as a “religious and spiritual person”.