The Canadian starlet caught the bug from her parents, who are both actors.

The show that made her a Hollywood name will end this season, but she surely has a bright future.
She told the NY Post, I’m open to all opportunities, but everyone has the dream of doing a big Hollywood blockbuster, for sure.”

1. She Plays the Secretary Who Won Over Don Draper

When Pare first auditioned, it was for the part of a prostitute. However, when the creator of the series, Matthew Weiner, looked at her, he saw something more.

Her first table read was pretty nerve racking, even though she only had one line. She told Vulture:

I finally got the script and I had one line and it was, “Yes, Joan.” You can picture me sitting there, like, quietly looking at, you know, Jon Hamm and John Slattery and Christina Hendricks and January Jones. I was freaking out. Everybody was there. I was like, “Yes! Joan!”

Then, one day, she got the news that she was going to be Draper’s wife, which was a huge moment in her career.
She told the Standard:

My phone rang, and I was terrified because I was sure that my character was going to fall down the elevator shaft. But instead he told me Don was going to propose to Megan. I didn’t even believe it. But Monday came round and the scene was still there.

The show ends after this season, and she told Elle how she felt:

It’s very bittersweet for us who have done it for years. It’s weird for me that I’m including myself in that pack, but I have done it for four years now, which is more than half [of the show].

Even though she shies away from talking about relationships in interviews, it’s known that she’s with John Kastner, a Canadian musician.

Kastner actually has “in a relationship with Jessica Pare” on his Facebook page.

Although this seems to confirm it, Pare still prefers not to answer the question in interviews.

When Vulture asked her if she’s seeing anyone, she replied:

Paré is divorced from writer and producer Joe Smith, who she married in 2007.

3. She’s Known for the Gap in Her Teeth

The actress, who was voted one of People Magazine’s Most Beautiful People, still gets self conscious about her teeth.

It’s funny, I get self-conscious when people talk about them, but I forget about them because they’re in my face so they do their job just great for the most part.

However, she is a good sport, even though the subject always seems to come up in interviews.
She told Esquire, “You can’t get a lot of sh-t stuck in these teeth.”

Because they are talked about so much, she did explain how the space came to be.
She told Vulture, “I didn’t want to have braces when I was a kid and I’m pretty sure my dad didn’t want to pay for them.”

In the first episode of Season 5, she sang a sexy version of ‘Zou Bisou Bisou’ to Draper for his 40th birthday. The actress recorded a version of the song and it became an iTunes hit, soaring to number one on the Billboard World Music chart.

The preparation for that scene became very involved, with her getting her own choreographer. She said:

Matt had told me that I was singing a song and doing a little dance, but I didn’t realize how involved it was going to be until they scheduled me for eight hours with a choreographer. And then eight hours turned into, you know, five days times eight.

After that, she went on tour with The Jesus and Mary Chain for a few days in 2012.

The new singer did get stage fright in the beginning.
She said:


Every time I had to go on stage I was like, ‘I can’t!’ But then I thought,’These people came to see their favorite band; they got a babysitter and they made dinner reservations and they called the cab and bought tickets, so don’t f*** it up for them!’

5. She Got Fat in a Funny or Die Clip

In the parody skit, the interviewer asks her how she stays in shape.

She answers, “I don’t workout. I’m lucky. I just eat whatever I want. Kale, and…I guess I’ve only ever eaten kale.”

When the interview mentions hamburgers, Pare embarks on a mission to eat a burger and becomes obsessed.

The video cuts to “Three weeks before Mad Men Season 7 begins,” and we see an extremely heavy Pare in her room surrounded by pizza boxes, a popcorn machine, and a soda fountain. 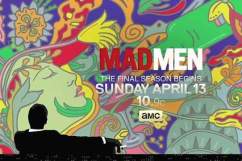