"I'm reserved. She's not. For whatever reason, it works. I think I'd be a good dad." – Taylor Kinney on Lady Gaga pic.twitter.com/E24pKWGfzi

Although it seems like Lady Gaga‘s antics would lend themselves to a drama-filled love life, the opposite is true.

The pop star has found a reserved actor with whom she enjoys the simplicity of life.

She explained, “I wear his flannels and we eat pizza and we watch TV. And then I play him my next single and ask him if he likes it. That’s our normal life.”

Here’s everything you need to know about the shockingly normal couple.

1. They Met on the Set of Her Music Video

In the video for “You and I” (above), the Chicago Fire actor is shown “electrocuting her to life,” as she described it.

On the Ellen Show, she explained their first encounter:

I looked ridiculously crazy. I’ve got these pins sticking out of my head, and I’m wearing cork and I’ve got no hair. Why he found me attractive just completely…

As they were shooting, Kinney gave her an unscripted kiss, which surprised Gaga: “I was sort of like, was that real or was that fake?”

In an interview with Sirius radio, she said:

He’s totally in charge. I mean, when I am home, I am like, shoes are off, I’m making him dinner. He has a job, too, and he is really busy!

She was sure to explain why she lets him have his way, saying, “I’m in charge all day long, the last thing I want to do is tell him what to do.”

The songstress is not afraid to talk about Kinney in interviews. On Ellen, she gushed:

He’s a hidden weirdo. He is extremely strange, actually. And we compliment each other’s weirdness. That’s actually one of the first things he ever said to me.

The two have opposite personalities, which seems to work nicely for them.

In January Kinney told E News, “I’m reserved. She’s not. For whatever reason, it works.”

When Kathie Lee and Hoda asked him about dating such an icon, he said, “I don’t know, I don’t have that outside view. I guess it’s normal, if you will. I’m a lucky guy”

Gaga confirmed this, saying, “At the end of the day, he’s my best friend. And having your lover be your best friend, it’s the best thing ever.”

When he pushed the subject further by asking if they’ve already had one, she said:

You know what, I’ve spoken a lot about my Taylor and … I don’t want to kiss and tell too much. I’m a little bit more of a lady than that.

5. They Broke Up Once But Couldn’t Stay Apart

They began dating in November of 2011, months after their music-video meeting.

Ironically, the song behind the music video was written for her ex, Luc Carl.

Months earlier, in May, Us Weekly announced that Gaga had broken up with Carl.

Gaga and Kinney split briefly in May of 2012 but quickly got back together.

A source told Us:

They are going to try and make it work even with her crazy schedule. Gaga realized she missed him. 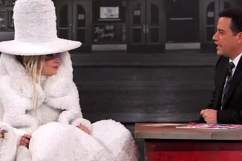