Tom Cruise has apparently been dating Laura Prepon and we’ve got all the details that have been reported right here. Read on for the facts.

1. The Two Were Previously Spotted Together in November

According to Page Six, the two actors have been secretly dating. In fact, their reps have even stepped in to deny dating rumors in the past.

P.R. reps for the two denied any romance in November after the actors were spotted enjoying a cozy dinner at the Manor Hotel in Los Angeles … However, my source on the Left Coast says Cruise and Prepon are still seeing each other, but they are being extremely careful to keep it secret.

2. Grazia Magazine Has Reports on the Couple’s Relationship

So random. RT @Refinery29: Well THIS is unexpected. http://t.co/BWVepslBGB pic.twitter.com/DkAEClj3k8

The British magazine Grazia reported this past fall that Cruise, 51, picked up Prepon, 34, “in a vintage car and had a bottle of 1979 Merlot waiting on the table when they arrived at the Manor Hotel.” The magazine stated:

They spent three hours laughing and joking. It’s clear Tom is smitten and after the date he was on cloud nine. They had their second date at the restaurant, too, meeting for Sunday brunch, and then she accompanied him a few days later to a dinner party at John [Travolta]’s home.

3. The Two Bond Over Scientology

Both Tom Cruise and Laura Prepon are scientologists, and supposedly share that bond together.

4. Cruise Has Been in the Media for Allegations About Being Gay and Auditioning Girlfriends

For years, celebrities as well as the tabloids have accused and joked about Tom Cruise supposedly being gay. In addition, there have been many reports that many women were auditioned to be Tom Cruise girlfriends. An insider told us that Tom Cruise had many women set up to possibly date him via the Church of Scientology.

5. Prepon Plays a Lesbian Drug Dealer on Orange Is the New Black

You may have gotten to know Prepon as character “Donna” on That 70’s Show, but now she plays a drug-dealing lesbian on Orange Is The New Black and apparently, her secret relationship with Cruise is “the buzz on the set of her show.” Have a look at a clip of Prepon on her show in the above video. 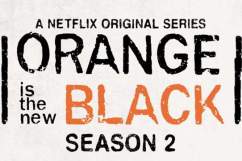