Meryl Davis is one of the contestants to beat on this season of Dancing With The Stars. Check out all the facts on Meryl and find out some things you may not know about her …

While many speculate that Charlie White and Meryl Davis are more than just figure-skating partners, the truth is that they are not. In fact, on the first day of practice for Dancing With The Stars, partner Maksim Chmerkovskiy gets very excited when he sees Meryl and asks her if she has a boyfriend. Meryl tells him she’s single and confesses to the camera that she thinks Maks is pretty hot. Check out the video clip.

As an ice dancer with partner Charlie White, who is also a competitor on Dancing With The Stars, Meryl Davis has many medals under her belt. Have a look at one of their performances on the ice in the above clip.

Wikipedia has a record of Davis and White’s accomplishments:

3. For the Switch Up Episode of Dancing With The Stars Meryl Was Paired With Val

On DWTS this season, Meryl Davis is paired with Maks, but for one of the episodes, the contestants are forced to switch partners. In an interesting twist, Maks and his brother Val have actually exchanged partners.

Meryl Davis actually has dyslexia, which she was diagnosed with in third grade and caused her to struggle in reading all the way through high school. Nevertheless, she persevered and became a member of the National Honor Society in addition to receiving the Phi Beta Kappa Society award.

5. Many Believe That Davis and Charlie White Are Dating

Unfortunately, Meryl Davis and Charlie White are not a couple. In fact, Charlie White has a girlfriend and her name is Tanith Belbin. Belbin is actually a retired ice dancer and is an Olympic silver medalist. 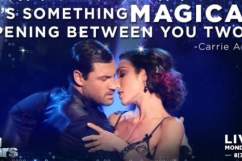 The Top 5 Reasons Meryl Davis & Maksim Chmerkovskiy Should Be Dating 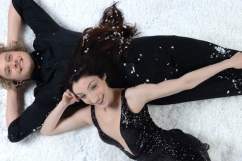