Tonight, Garth Brooks honored Merle Haggard with the Crystal Milestone Award at the 2014 ACM Awards. In a tribute performance, country stars Miranda Lambert and George Strait sang “I’m A Lonesome Fugitive,” Haggard’s first hit, for the occasion. And, because tonight is also Merle Haggard’s 77th birthday, the crowd serenaded him by singing “Happy Birthday” as he made his way up to the ACM stage to accept his award. 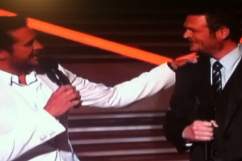 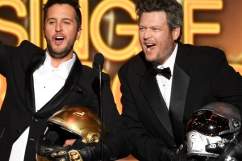