Paul Stanley played his first gig as part of Kiss in 1973 and is still being honored to this day.

Rolling Stone summed up his career best by saying it was “40 lucrative years playing bass, breathing fire, spitting blood and waggling a tongue so freakish… .”

The 62-year-old is celebrating two big milestones this week — the release of his memoir and the band’s induction into the Rock and Rock Hall of Fame.

Here’s all you need to know about one of the rockers behind Kiss’ 100 million records sold over four decades.

When Stanley was young, he grappled with feelings of being out of place. Hiding behind makeup made him feel safe.

Parade magazine published an excerpt of his book in which the singer, whose given name is Stanley Harvey Eisen, describes becoming Starchild:

The character taking shape on my face originally came about as a defense mechanism to cover up who I really was. For many years when I first put this makeup on, I had a sense of another person coming out. The insecure, incomplete kid with all the doubts and all the internal conflicts suddenly got painted away, and that other guy came out, the guy I had created to show everybody that they should have been nicer to me, that they should have been my friend, that I was someone special. I created a guy who would get the girl.

“@bronxbmrs2: @PaulStanleyLive hey Paul do you put your own makeup on before each show?” Yes

He says that his band is way bigger than the music, and sends a deeper message to its fans.

He spoke to the Daily News about this concept:

KISS is an ideal. It’s a point of view; it’s singing of self-empowerment and giving people a sense that anything is possible and that we’re entitled to an evening of escape. What we sing about is timeless. It’s about freedom and a celebration of life.

2. He Never Could Hear on His Right Side

KISS star Paul Stanley on fame, feuds and secretsKISS front man Paul Stanley has written the memoir "Face the Music: A Life Exposed." Stanley sat down with CBS News' Anthony Mason to discuss his ongoing feuds with his former band mates and being inducted into the Rock and Roll Hall of Fame.2014-04-07T13:48:39.000Z
He was born with microtia, a deformed ear which prevents him from hearing on his right side.

The son of Jewish immigrants, Stanley grew up humbly in Queens, New York. His parents didn’t take his condition seriously, so, at 15, the teen called the psychiatric clinic of a hospital and found a therapist.

According to the Daily News, that therapist, Jesse Hilsen, wound up being Kiss’ manager.

Now he lives in a Beverly Hills mansion. He said, “It’s certainly not the environment I grew up in.”

With CBS, he talked about his drastic transformation from a disabled child to a rockstar.

This lonely little kid who couldn’t get a date, didn’t know how to interact with people, couldn’t hear, had learning issues in school, suddenly became sought after by women, envied by guys, sold millions of albums.

“@JacksonStan65: @PaulStanleyLive Hi Paul,may I ask how old you were when you first picked up a guitar?” 13

3. He Considers the Rock and Roll Hall of Fame ‘Fluff’

On April, the band will be inducted into the Hall of Fame at Brooklyn’s Barclays Center.

Stanley has not stayed silent on his anger over their decision to only induct the band’s original members.

Frustrated with the decision, he told Rolling Stone:

I don’t need the Hall of Fame. And if there’s not reciprocity, I’m not interested.

In his first TV interview, with Anthony Mason of CBS This Morning, he said that the Hall “is fluff.”

It’s been 15 years since the world-famous band was first eligible for the Hall, and Stanley doesn’t consider it an honor now that the moment is finally here.

We are the bitter pill that they ultimately had to swallow. Because they don’t like us. The only reason they’re inducting us, is because they begun to look foolish at some point for not having us in.

Face the Music: A Life Exposed hits stores on April 8.

Some highlights of the book are Kiss’ first show in front of four people in Queens and Stanley’s realization that he needed more than random hookups.

He told the Daily News:


Look, I don’t want sympathy for bed-hopping with Playboy playmates and Penthouse pets and famous actresses. It was a big part of my life and it was a great time. But I didn’t want to spend my life like that. I think we all need to figure out what is going to make us happy.

5. He Didn’t Invite Band Mate Gene Simmons to His Wedding

The two formed the band after meeting in Israel in 1970.

Stanley has been vocal about Simmons’ attempting to leave the band to pursue acting aspirations.

According to the NY Post, Stanley didn’t invite Simmons to his wedding because Simmons bashed the idea of marriage. Stanley said:

But when you insult and demean people who get married and ridicule or dismiss the idea of marriage, you have no place at a wedding.

He told CBS that he still gets annoyed with his colleague:

So he’s the guy who everybody sees as like the brains behind KISS, which is really he is the mouth behind KISS. I always tell people he lives two minutes away and I can see his ego from here. 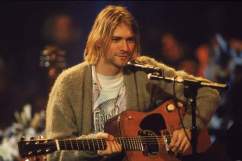 Remembering Kurt Cobain: All the GIFs You Need to See

Read More
Books, Celebrities, Gene Simmons, Kiss, Music, Paul Stanley
Paul Stanley, aka Starchild, transformed from a sickly kid into a rockstar and writes about it in his new book, Face the Music. His band, Kiss, is also being inducted in the Hall of Fame.