Designer Tom Ford has married his partner Richard Buckley. The two have been together for 27 years and have finally tied the knot. Read on for the facts on the nuptials, their relationship, and Ford’s new husband Richard Buckley.

1. Ford Was the One Who Spilled the Beans on Their Marriage

Page Six reported that the longtime couple got married after being together for 27 years. During a presentation Ford was giving at the Regent Street Apple Store in London, shown in the above clip, Ford revealed that he and his partner Buckley had made their relationship legal.

I lost so many friends in college – I would say more than half of my closest friends. Richard, my partner of 27 years, had also gone through something also quite tough in his life. We are now married which is nice. I know that was just made legal in the UK which is great; we were married in the States. 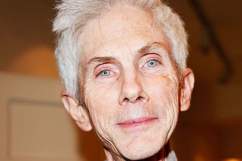 2. They Have a Son Together

Buckley and Ford have a son named Alexander John Buckley Ford and help balance each other as parents. In fact, they are living examples of opposites attracting. Out Magazine quotes Ford as describing their relationship dynamic:

I was very quiet at the beginning of our relationship — I’m actually a very, extremely, almost pathologically shy person, which no one believes today, because I have also mastered a work/public facade that takes an enormous amount of energy to project … And Richard, when we first got together, was very, very social and very talkative. Richard is an extrovert, and I’m an introvert, but meeting us today you would think the opposite. Richard, now, often, can be quite quiet, especially if he knows you well. But if you get Richard at a party, he’s extremely animated. I actually hate parties, and I try not to go. I prefer dinner one-on-one or with four or six people.

3. The Two Met at a Fashion Show

It’s only fitting that Richard Buckley met high-end fashion designer Tom Ford at a fashion show. The two met in the 1980s and Ford described their attraction in an interview with WWD as reported by Vogue UK.

I went to a fashion show and this silver-haired guy was staring at me with these piercing water-blue eyes. It scared me because I absolutely saw and knew my entire future.

In an interview with OUT Magazine, Ford gushed about his partner Richard Buckley saying:

You can look at someone and feel like you’ve known him forever. The first night I ever had drinks with Richard I felt I knew everything about him. He has the wildest eyes — like an Alaskan husky. They’re not blue, they’re not gray, they’re a color you’ve never seen before — they approach silver. They give away absolutely nothing, yet they are completely mesmerizing.

When Buckley met Ford, he was 38 years old and Ford was only 25. At the time, Buckley was the fashion editor of Women’s Wear Daily and Ford worked for Cathy Hardwick. Days after their first encounter, Ford was sent to WWD on an errand and came in contact with Buckley once again. It was then that Ford decided he would one day marry Richard Buckley.

Buckley opened up about the moment he saw Ford in an interview with OUT saying:

After three and a half years in Paris, I moved back to New York to be the editor of a new Fairchild magazine called Scene. On my fourth day back in town, I attended the show of a young designer called David Cameron. As I was waiting for the show to begin (it was held in a loft), I noticed a guy standing in the crowd off to the side and thought, Cute. Definitely cute.

When the show was over, I sat in my seat, fiddling with my pens and my notebook, until I saw his camel coat out of the corner of my eye. I hopped up and started to walk out with him. Like I said, we were in a loft, and the quickest way out was by the stairs. As we walked, I would look over at him from time to time and smile. He’d give me a weak smile back. This went on until we hit the street, when I swear he sprinted away from me.

4. Richard Buckley Was Diagnosed With Cancer

Three years after the couple moved in together, Buckley was diagnosed with cancer and he was actually told that the illness was likely fatal. Ford opened up about the ordeal saying:

We’ve had a fair amount of personal family tragedy, and things happen that do, ultimately, bring you closer, because they’re things you go through together and they make your history richer.

As far as the couple’s moving in together, Buckley talks about how it all went down:

On New Year’s Eve 1986, we didn’t go out. We stayed at my little apartment on Saint Mark’s Place. I gave him a little Tiffany box, and inside was a key to my apartment. He moved in the next day.

5. The Early Days of Their Relationship Were Filled With Hospital Visits

In the beginning of their dating, both Buckley and Ford had friends who were in the hospital dying from AIDS. Ford revealed to OUT Magazine:

Ford further talked about the prominence of loss in both their lives and how it affected their relationship together:

There was still enormous fear, and that affected our early sexual relationship tremendously, as well as just watching very close friends die at the same time we were falling in love. If we made a list, I would say that half of our friends from the early ’80s are no longer with us. It continued into the early ’90s — it just didn’t stop.

Read More
Celebrities, Richard Buckley, Tom Ford, Twitter
Tom Ford has married his longtime love Richard Buckley. Check out the facts on their nuptials, their life together, and the struggles they've overcome together.