Eminem and Rihanna are performing their second-ever song together “The Monster.” Previously, the two collaborated on the hit single “Love The Way You Lie” and tonight they will perform at the 2014 MTV Movie Awards. Broadway World writes:

With one of the hottest collaborations released last year, both Eminem and Rihanna are making triumphant returns to the Movie Awards stage.

This will be their first-ever performance of Rihanna and Eminem’s “The Monster.” 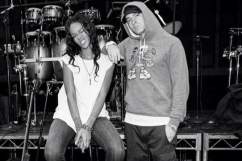