This episode is based on different decisions the gang each has to make that will change their lives.
Whether they’re about relationships, careers, or gaming systems, the choices are causing lots of drama.

A dinner date at Amy’s apartment ends in a kiss.

It happens when Sheldon goes to leave, because Amy asks him if he’s forgetting something.

Obediently, he goes over to kiss her goodbye.

Although they both seem to be into it, Sheldon has to ruin it by mentioning a gaming system dilemma.

This is the second lip lock for the pair, the first being on Valentine’s Day.

2. Raj Is Dating Two Women at Once

It seems that the unlucky-in-love Raj got a note from his old flame, Lucy, asking to see him again.

In the meantime, he also strikes up a conversation and date with Amy’s friend, Emily,

During his date with Emily, Raj spills that he is, in fact, dating two women.

All ends well when Emily says that she doesn’t need to know that personal detail.

3. Penny Gets a Movie Offer

The struggling actress landed the sequel to Serial Apeist and she can’t decide whether or not to accept.

In the role, she would have to wrestle a bikini wearing orangutan and wear giant monkey hands.

Penny and Leonard meet up with actor Will Wheaton to get some career advice.

At the end of the episode, it’s revealed that her costar is none other than Wheaton himself.

4. Sheldon Has to Decide at Best Buy

Throughout the episode, Sheldon is driving everyone crazy because of his inability to make a decision regarding his impending purchase of a gaming system.

When it comes time to buy it, he makes a decision, and then goes back to being undecided.

Because he’s waited so long, the store closes, and Sheldon leaves, crying.

She signed a card at work for a friend who she thought was retiring.

It turns out she had been in an accident, and Bernadette is worried because she made some pretty inappropriate comments in the letter. 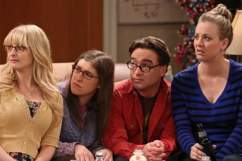