He’s seen above April 7 on Monday Night Raw, in what turned out to be his last public appearance.

Here’s what you need to know about the career and death of one of the most charismatic wrestlers in history:

1. He Collapsed While Walking From His Hotel; His Death Was Ruled as a Heart Attack

TMZ reported that Warrior collapsed outside of an Arizona hotel at approximately 5:50 p.m. on April 8, 2014. He was reported to be walking with his wife to his car during the moment of his initial collapse. After he was brought to a nearby Arizona hospital, Warrior was pronounced dead.

Warrior’s official autopsy revealed the cause of his death – a natural death brought on by Atherosclerotic/Arteriosclerotic Cardiovascular Disease symptoms (heart disease). The autopsy also revealed that no drugs or alcohol were directly involved in Warrior’s untimely passing.

The news of Ultimate Warrior’s death were solidified once WWE.com released this official statement through it’s website:

WWE is shocked and deeply saddened to learn of the passing of one of the most iconic WWE Superstars ever, The Ultimate Warrior. Warrior began his WWE career in 1987 and quickly went on to become one of the biggest stars in WWE history. Warrior became WWE Champion at WrestleMania VI, defeating Hulk Hogan in an epic encounter. We are grateful that just days ago, Warrior had the opportunity to take his rightful place in the WWE Hall of Fame and was also able to appear at WrestleMania 30 and Monday Night Raw to address his legions of fans. WWE sends its sincere condolences to Warrior’s family, friends and fans. Warrior was 54 and is survived by his wife Dana and his two daughters.

Vince McMahon, along with Triple H and his wife Stephanie McMahon took to Twitter to offer their condolences:

We are all so sad that the Ultimate Warrior has passed away. Our heart is with his wife Dana and his two daughters.

Saddened to announce the passing of the Ultimate Warrior. Icon and friend. My sympathy to his wife Dana and his daughters

#RIPUltimateWarrior Your strength of character is to be admired. There will never be anyone like you. Your spirit lives on in your family.

2. The Ultimate Warrior Was Just Inducted Into the WWE Hall of Fame

3. He Made An Appearance on Raw The Day Before His Death

4. Hulk Hogan and Daniel Bryan Made Sure to Pay Their Respects

After the news of Warrior’s passing began to spread, Warrior’s greatest rival, Hulk Hogan, made sure to pay tribute to him via Twitter. Daniel Bryan also took to Twitter to talk about Warrior’s devotion to his family and his warmness towards Bryan himself:

Heartbroken. My sincerest condolences go out to The Warrior's family. Seeing how much he loved his daughters and his wife this weekend…

… makes it all the more heartbreaking. The Ultimate Warrior was my favorite as a kid, and getting to speak to him this weekend was one…

… of my favorite moments. He was so nice to me. #RIPWarrior

5. He Had a Long And Illustrious Career

The Ultimate Warrior was a force to be reckoned with during his run in the WWF and WCW. During his time in the WWF, he captured the WWF World Heavyweight Championship and won the WWF Intercontinental Championship on two occasions.

During his later years as a non-WWE wrestler, Warrior became the Nu-Wrestling Evolution World Heavyweight Champion. Warrior competed in his biggest match ever against Hulk Hogan at WrestleMania VI, a bout that was ranked as Pro Wrestling Illustrated’s 1990 Match of the Year.

You can all take a peek at the best parts of that legendary match-up in the video above. 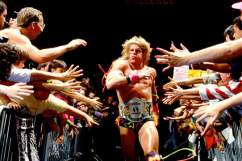 RIP Ultimate Warrior: 20 Photos of the 2014 WWE Hall of Famer