Godzilla is going to stomp and roar all over movie theater goers this summer.

The trailers that have been unveiled to the viewing public thus far have gotten old-school followers of the big lizard excited. And now, this new extended trailer offers a closer look at the important human cast and the stories that connect them to Godzilla’s reign of terror.

Make sure you’re sitting down in a quiet spot because you’re going to need to be in deep concentration for this deeper look into Godzilla’s reintroduction. Ladies and gentleman, this is Godzilla. Be afraid. Be very afraid. 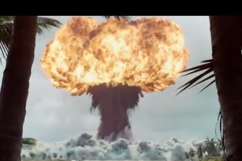