Sin City fans got their 1st inside look at the initial trailer for A Dame to Kill For in March 2014. Dimension Films is giving fans another look into Frank Miller’s crime ridden city and the many hard-boiled individuals who will cross paths with each other. This brand new trailer gives viewers a look at just how fragile the use of power can be in a world ruled by grime and crime.

And while you’re waiting for that day to arrive, check out this new hot photo of Jamie Chung in action: 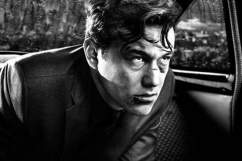 WATCH: ‘Sin City 2: A Dame to Kill For’ Trailer