If you watched Episode 2 of Season 4 in Game of Thrones, then you’ve seen the infamous Purple Wedding. King Joffrey has been murdered, presumably by poison, and whoever did it has framed Tyrion in the process. Above you can watch the death in question. So, who did it?

Below are the five most likely suspects, followed by the actual answer taken from the books. If you don’t want to know, don’t scroll all the way down.

Oberyn has come to the capital for the wedding with the sole purpose of declaring war on the Lannisters. His sister and her children were murdered in the sacking of King’s Landing, and now he wants to be the thorn in Tywin Lannister’s side. What would be a more fitting revenge than to kill the king on his wedding day, surrounded by his family?

Poor, poor Sansa. After Joffrey made her look at her father’s severed head, and then arranged for the vicious murder of her mother and older brother, why wouldn’t she want to see him dead? The question is, did she have help?

For the most part, the War of the Five Kings is over, but Stannis is still out there, and worse, he has the power to kill from a distance. We know from two seasons ago that Stannis and his Lord of Light magic can kill wanna-be kings from far away, and we also know he has the motive. Could the killing be a spell preformed by the red woman?

Above you can reminisce about the time Margaery Tyrell actually thought she wanted to mary Joffrey, long before she knew what a lunatic he is. Since then we’ve heard Margaery talk badly of Joffrey and his malicious and brutal deeds to almost anyone who would listen. Why wouldn’t she want to kill him? She’s already queen, but now she doesn’t have to deal with him.

This one may seem a little far-fetched, but think about it, Joffrey was really more of a liability than a boon to the Lannisters’ plot for world domination. According to the line of succession, Joffrey’s younger and more easily controlled brother would replace him, which makes killing Joffrey a pretty smart thing for any Lannister hoping to prevent an uprising, rebellion or revolution.

Warning: The Real Answer Based on the Books Is Below

Remember when Olenna Redwyne Tyrell, aka the Queen of Thorns, was talking about the Red Wedding and she said what a shame it was to kill a man during a wedding. Yeah, that should have been a dead giveaway right there. In a conspiracy between Olenna, the ever-scheming Littlefinger, and Dantos the court jester, she poisoned the king after the wedding to spare her granddaughter from having to spend a life with that abusive bastard.

Although there’s always a bit of mystery in the books, even George R.R. Martin confirmed this storyline in a recent Rolling Stone interview. 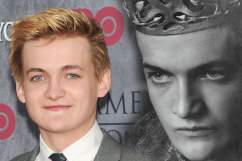 Did you celebrate when Joffrey died?  watch the most hilarious viewer reactions.