Several wrestling legends will be on hand for the event, along with the Hall of Fame 2014 ceremony taking place the night before. One badass, beer swelling, middle finger showing WWE Hall of Famer will definitely be showing up at WWE’s biggest show of the year – “Stone Cold” Steve Austin. He just flew into New Orleans this morning to reveal his welcome presence at this huge wrestling extravaganza.

Check out TMZ’s video above with Austin above to hear the confirmation of this latest bit of news.

LAS VEGAS, NV – JANUARY 08: Actor and WWE personality “Stone Cold” Steve Austin appears at a news conference announcing the WWE Network at the 2014 International CES at the Encore Theater at Wynn Las Vegas on January 8, 2014 in Las Vegas, Nevada. The network will launch on February 24, 2014 as the first-ever 24/7 streaming network, offering both scheduled programs and video on demand. The USD 9.99 per month subscription will include access to all 12 live WWE pay-per-view events each year. CES, the world’s largest annual consumer technology trade show, runs through January 10 and is expected to feature 3,200 exhibitors showing off their latest products and services to about 150,000 attendees. (Photo by Ethan Miller/Getty Images)

I’m telling you, I’m going to stick to my prediction that CM Punk is going to make his return at WrestleMania 30 in New Orleans. I made this prediction two months ago here on the show. It’s been a long time, I think he’s cooled his jets, he’s got some rest, and I think it’s time to get back to work. I don’t see him participating in a match but it would be great to see him in a run-in to establish himself, to entrench himself immediately in a memorable and just a great moment, and I would say plant himself firmly in the middle of an angle, because he would be the angle, by attacking whoever he sees fit to attack or asserting his presence rather, whatever the case may be.

Packing my bags and drinking a Firestone IPA. Priming up for #WM-30 in NOLA. #OHHELLYEAH! #steveaustinshow

Austin took to Twitter before he arrived in “N.O.L.A.” and sent out a few WrestleMania 30-related Tweets before he flew on over to this weekend’s base of wrestling operations.

Lots of folks headed to NOLA for #WM-30. Good story coming from the bathroom at Delta Sky Club… 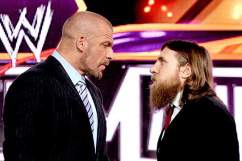