Back for one hour and Jack Bauer is already busting heads and breaking people out of CIA black sites. The CIA thought they had caught a very much wanted criminal, but Jack set the whole capture up to rescue his CTU pal Chloe.

Now agents Steve Navarro and Kate (who figured out Jack’s plan) are trying to track down the elusive agent.

Elsewhere in Afghanistan, an American drone has been compromised and taken out an American convoy.

Jack makes a big show of his power when he could have asked Chloe nicely for his help. He needs to find Derrick Yates, a different kind of computer hack, who’s taking over control of the drones with the intention of taking out the President.

Taking out those four soldiers, two of them British officers, was just a dry run for Yates, that was successful.

2. Jack’s Not Saying Why He Returned

Chloe wants to know Jack’s intentions for returning. He won’t say, but she’s pretty sure its to get back in the good graces of the U.S. government. Or perhaps return home to his daughter Kim, who’s delivered another baby boy recently.

President Heller wants to appeal to the Brit’s better angels and address Parliament after that U.S. drone (hacked by Yates) killed two of their military officers.

Honesty is good, but remembering the facts is even more important. And that’s something the president is struggling with as his conditions quickly worsens. The president can’t remember how many soldiers (four) died in the attack or their names. It doesn’t look good.

4. Jack Finds Yates and Then Loses Him

Jack tracks down Yates through his heroin dealer Basher (those drug addictions are so pesky). Jack easily takes out Basher’s men, but the time necessary to take everyone down gives Yates and his Russian girlfriend enough time to escape Basher’s apartment.

Jack grabs Yates’ memory stick from his computer in the back room and leaves Basher lying on the floor bleeding from the neck… but not dead.

The CIA shows up on the scene, but they’re so concerned with Jack they let Yates innocently walk away. Yates slips away before Basher returns to start firing at Jack.

Chloe hot-wires a nearby car (which Jack is clearly proud of) and she brings up Yates’ memory stick to show his drone hacking project. But Yates is smart and created a program to delete all the information in case someone else opened up the files.

Oh, but Yates maybe careless after all. He leaves his brief case unattended and lets his silly little Russian lover stab him to death in the men’s restroom of a seedy restaurant. Good knowing you Yates! 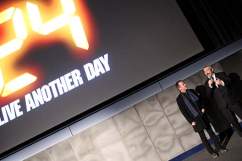