Jack is back! Jack Bauer returned tonight to save the world one more tonight in the 24 reboot Live Another Day that will cover the typical 24 hours, but in 12 one-hour installments.

Jack Bauer’s living as a squatter in an abandoned warehouse in East London, when a team of intelligence agents capture him by the river. Jack has managed to live under the radar since becoming a fugitive of the United States four years ago.

Multiple agencies have a warrant out for him, labeling him as a “criminal” and “terrorist” for the vengeance terror spree he went on last time we saw him.

Finding Jack might not be the lucky break the intelligence community was hoping for though, especially with the President in town.

President Heller has crossed the pond for an international conference on drones. His biggest problem may prove more personal when he makes a small error during a meeting with his staff, confusing Teddy Roosevelt and Franklin D. Roosevelt.

The mix-up has his chief of staff Mark Boudreau (Tate Donovan) concerned, but the president won’t take his pity.

3. Jack Only Gets Caught if he Wants to Get Caught

The tip that lead to Jack’s capture may have come from Mr. Bauer himself.

Agent Kate Morgan figured that one out, even as she’s set to return stateside after missing husband betrayed his country right under her nose. She needs to prove herself and no better way then to outsmart Jack.

4, Jack Has Come to Rescue Chloe

Jack’s country may have given up on him, but he hasn’t given up on his friends (“friend” may be the wrong word, since Jack claims he doesn’t have any). He’s orchestrated his entire capture to break Chloe out, who’s being held by special activities for a brutal drug regimen.

He breaks Chloe out, and the two are now on the run.

5. The Drones Have Taken Over

America’s drones have turned, or, more probably, someone has taken over America’s control of the unmanned weapons. 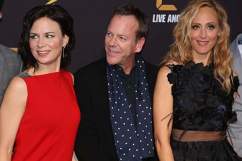