The band 5 Seconds of Summer, most commonly known to their fans as 5SOS, are made up of four guys – Ashton Irwin, Calum Hood, Michael Clifford and Luke Hemmings. Tonight the guys are performing at the 2014 Billboard Music Awards and we’ve got all the info on the group just for you.

1. 5SOS Is Making Their First U.S. Debut at the Billboard Music Awards

Tonight will be the first 5SOS publicized performance in the United States at the 2014 Billboard Music Awards. The band has been promoting their debut non-stop, even taking over the BBMAs’ Twitter page to answer questions from fans today. Have a look at some of the band’s rehearsal and down time, getting ready for the big event. Fans are so excited for the BBMAs performance that the hashtag #5SOSBBMAs has been trending all day.

Ashton is wall twerking at the bbmas #butts #5sosbbmas pic.twitter.com/ezzr18pNHo 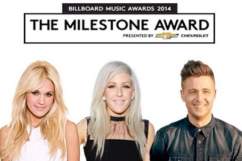 Tomorrow is the release of 5SOS’s new music video “Don’t Stop.” Check out an audio clip of the song below:

3. Their Self-Titled Album Comes Out in June

Their self-titled debut studio album is going to be coming out in June 2014. In February 2014, the band dropped their single “She Looks So Perfect” as their debut worldwide release.

5 Seconds of Summer began in December 2011 when Luke Hemmings, Michael Clifford and Calum Hood, who all attended Norwest Christian College, started posting videos of themselves performing covers of popular songs together on Hemmings’ YouTube channel … In December 2011, they were joined by drummer Ashton Irwin, and the four-man line up was completed.

5. One Direction Helped Supply the Group With a Whole New Level of Fandom

They are fucking great musicians. I am a bit jealous of them. I am working on learning to play now but I wish I had put the time in like they did when they were kids.