The band 5 Seconds of Summer made their U.S. debut at the 2014 Billboard Music Awards, singing their popular hit “She’s So Perfect.” This has been a long-awaited performance by the band. Check out their performance in the above video.

As Kendall Jenner announced their performance, she pulled a major flub and sounded like she was about to say One Direction. Yikes. It was a pretty big mistake. 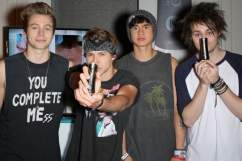