Saturday Night Live’s 39th season finale was hosted by Andy Samberg tonight, so of course he had to deliver a hilarious opening for the show. For the very beginning of his skit, Samberg announced that Justin Timberlake would not be appearing on the show because he’s touring in Russia. However, Timberlake did send a photo of himself giving the finger with a sign that said, “You’re gonna blow it.”

A person who did stop by for the opening monologue was former SNL‘er Seth Meyers. Meyers was there to help Samberg go through as many famous impressions as possible.

Towards the end of the skit, Bill Hader showed up to combat Samberg in his impressions and Martin Short presented Hader with flowers upon beating Samberg. 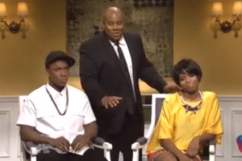