On tonight’s episode of Catfish, Antwane was searching for the man he loves, but has never met. After a little investigation, Catfish co-host Nev Schulman finds a mugshot of a man named Anthony Thomas. According to Odd Crime:

In Florida News: 33-year-old Anthony Thomas of Ocala, Florida, was arrested for allegedly stealing cash out of a register from a gas station after applying for a job … Thomas filled out the application, however, when the store clerk turned his back and started tending to other store duties , Thomas smoothly reached over the counter a few times and managed to grab $130, in total, out of the register, he made some small talk with the clerk, said his goodbyes, and casually walked out.

Thomas tried to deny stealing anything, but the surveillance footage proved otherwise. Ultimately, Thomas was charged with “burglary, resisting an officer with violence, and petty theft.”

Although the Catfish team thought they were on the right track, the catfish was not Anthony Thomas and actually turned out to be Antwane’s cousin Carmen. For more info on what went down on the show, click the below link: 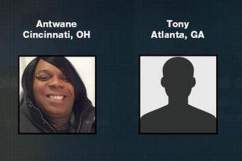 Antwane & Tony on ‘Catfish’: 5 Fast Facts You Need to Know

Read More
Catfish, Mugshots, Reality TV, Twitter
On Catfish tonight, a man named Antwane was searching for his longtime love who he'd never met when the crew came across a mugshot ...