The Griffins are huge fans of Shark Tank and sent the show an email in May of 2013. A few weeks later they got a phone call, asking them to send a video, and the rest is reality-show history.

We caught up with Matt to see how his business has grown after his appearance on the reality show.

Business hasn’t changed in a Cinderella sort of fashion – but sales have been great. We have enjoyed a 40-50% growth in sales – which is a huge jump for an established brand.

For the 6th year in a row, their brownie pan is the best selling product in it’s Amazon.com category and has been endorsed by America’s Test Kitchen.

As the show airs their episode again on December 26, Matt already sees another influx of orders on the horizon. “We anticipate selling out of inventory after tonight’s encore,” he said.

Let’s learn about the baking business that faced the sharks.

1. It All Began With a Brownie Pan

The Edge Brownie Pan was the first product the Griffins created. The unique design maximizes the result of chewy-edged brownies.

“It continues to be our top seller, and really revolutionized the way people think about brownies — edges vs centers.” he said.

They expanded their line to include pans for lasagna and muffins.

The items can be found for sale on Amazon.

Matthew and Emily are committed to the project and realize they are in it together for the long haul.

“The good news is we know neither of us can quit, or get fired, so it really forces us to figure out solid compromises — and to listen more than talk, a valuable lesson,” he said.

When asked what it was like to work with his wife, Griffin said, “It’s exactly how you might imagine. Great sometimes, and not great other times.”

On weekends, the couple spend time in the kitchen passing on the baking gene to their three children. One of their favorite desserts to make is cookies.

“Baking has slowly become a tradition for us. It somehow crossed over into our personal lives from our business lives,” he said. 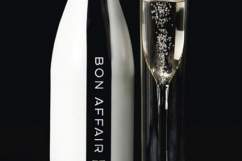 She adds her recipes for treats such as Cinnamon Muffins and Signature Cookie Bars to their website.

Out of all the things his wife cooks at home, Griffin’s favorite is “brownies, of course.”

After four years of running a successful business, the pair appeared on Oprah, and things took a drastic turn.

“Our business definitely rounded a corner because of Oprah,” Griffin said.

The powerful host even included their pans in her final “Favorite Things” as well as her “Behind the Scenes” episodes in 2010.

The results transformed their company, allowing them to pay off all of their debt. “After that airing we became a cash business — completely independent of bank loans and lines of credit,” he said.

5. Griffin Thought He’d Pass Out on the Show

Having run the business for eight years already, the Griffins were completely confident in speaking about it.

However, that all changed when they caught site of the Sharks sitting before them.

… as soon as the doors opened and we saw the Sharks sitting there … it was a whole different game. Being a fan of the show, that moment was surreal to the point that I thought I might pass out. We were definitely stunned when we first walked out, but eventually we felt more at home in the setting. The experience is every bit as intense as it is made out to be on TV — if not more so.

Their exposure on the show will undoubtedly give their products another boost on a national stage, and Griffin is thankful for the experience:

To get air time on the most popular show on Friday night — and to speak directly to 7 million or so viewers about your business — can only help. Not only that, small business brands are simply a reflection of their owners’ personalities. This show is the best venue to link the people to the brand. We could not be more excited about that very aspect. Our business has flourished with press over the years, so we can speak firsthand how this sort of exposure can boost your presence and brand reputation.