Barbara Walters was welcomed on stage for her last show on The View with tears and hugs. Several celebrities joined the audience to witness Barbara’s last day, including Rosie O’Donnell, who appeared on the show yesterday, along with the rest of the show’s former co-hosts. In addition, the show was packed with surprise celebrity guests, starting with Hillary Clinton, who Barbara couldn’t resist grilling about her running for presidency. When Walters asked her if she was running, she replied, “I’m running around the park …”

Comedian Cheri Oteri put on a skit with Barbara, pretending to be Barbara Walters, so that she could interview herself. Acting as Barbara Walters, Oteri jokes that her goals in life include getting a Costco card.

They're running my Barbara Walters interview this Friday! Dont mind being bumped by Letterman:) pic.twitter.com/u2VxQC1zqY

Michael Douglas, Barbara Walters’ birthday buddy, showed up to pay tribute to Barbara on her last day. Their birthday is September 25th, along with wife Catherine Zeta-Jones and 25 other mutual friends of theirs. As Barbara is retiring, she brings up the fact that Michael is going to turn 70 on his next birthday. While trying to figure out how Michael will celebrate, he brings up Barbara’s amazing dinner parties. He says she runs a tight ship and is very strict with her guests, but the food is amazing, it’s an educational experience, and the company is fantastic.

After a chat with Michael Douglas, the show displays a clip of Walters’ first interview with Michael in 1987.

Following a commercial break, Michael opened up about the rocky year he’s had with wife Catherine Zeta-Jones, saying that if both people want to work it out, they work it out. He says they’re doing great and then the show cut to a clip from his new movie coming out with Diane Keaton.

Another surprise came when Oprah Winfrey showed up on the show to let Barbara know how special she is and how much she inspired her. Oprah tells Barbara, “You have literally meant the world to me.” She then thanks her for being a pioneer in the industry. Then Oprah talks about her first audition for television. She said she didn’t know what to do, so she just started acting like Barbara Walters.

Watch me surprise Barbara on her last day on The View today. #CelebrateBarbara pic.twitter.com/qJ6O1JmaJX

After a clip from the Barbara Walters’ special, which will air tonight in order to celebrate her career, dozens of famous women in television were welcomed to the stage to hug and kiss Barbara, thanking her for being such a trailblazer. These women included Gayle King, Maria Shriver, Diane Sawyer, and Connie Chung.

Then, Barbara delivered her final word, joking about what she’ll be doing with her time off after 50 years in television. She then began to talk about the glamorous people she’s interviewed over the years, thanking her cast and crew on The View individually for their dedication over the years. As Jenny McCarthy wiped away tears, Barbara joked that she may be making TV appearances in the future, so never say never. She also said she couldn’t end things without a promotional plug, so she was sure to mention her TV special again, airing tonight. 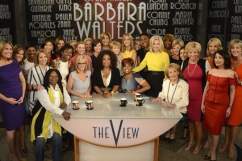