We finally know what Ben Affleck’s version of Batman will look like in the Zack Snyder-helmed Batman v Superman superhero crossover film.

This new remodeling of the Batsuit definitely looks like it owes some of its design to the one seen in The Dark Knight Returns graphic novel. It now sports smaller ears on top of the cowl and a much larger Bat logo on the chest piece. Affleck’s Batsuit is much bulkier than the one seen in the Christopher Nolan series of Batman films. Fans also got a good look at what the new Batmobile will look like. This new Batmobile returns to the sleek look it once sported in past film iterations in the Batman series.

It will be interesting to see how things unfold when Batman v Superman hits theaters on May 6, 2016 (the same day that Marvel Comics’ 3rd Captain America movie launches).

Check out the new official rebranded logo and title of DC’s Batman vs. Superman! 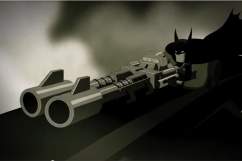