American Idol favorite Caleb Johnson was interviewed last week and was asked what he thought of social media to which he replied:

It gives access to a bunch of retards to talk to me. And I don’t really, uh, enjoy having to see somebody tell me what song I need to sing. I think at this point in the competition, I can pick and choose my own songs and represent me in the best… I don’t need 10,000 people saying, ‘You should sing this, you should sing that. Listen to me!’ … Fortunately, guys, I’m going to listen to myself, whether you like it or not.

Let’s just say that Idol fans were not pleased and this may have affected Johnson’s fate on the show. Johnson probably realized this, so he posted an apology via his Facebook page. The apology wasn’t for the “retards” comment. It was to make sure “his fans” knew that the comment wasn’t directed at them. Johnson said the comment was directed at his “haters.”

We appreciate the attempt to save his tush, but do Johnson’s fans believe his apology or think it’s sincere? Guess we will find out Wednesday and Thursday night this week. 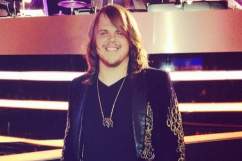