Cody Simpson and his love of one year, Gigi Hadid, have reportedly broken up. Read on for the details on the young couple’s split.

Simpson’s rep confirmed the news and Us Weekly reports that a source reveals Simpson initiated the split because he needed to “experience life.” He is only 17 years old, so this reason is quite understandable.

2. Their Crazy Are Said to Have Been a Factor in the Split

Multiple sources told different media outlets that hectic schedules were to blame for the split. The NY Daily News reports a source revealing that:

Their busy schedules and living on opposite coasts have made it nearly impossible for the two of them to give the relationship the attention that it needs.

Us Weekly records a source as saying basically the same thing.

Both of their schedules were too crazy. They had different priorities.

3. The News Comes Just After the Couple’s Music Video “Surfboard” Came Out

4. Simpson’s Partner on Dancing With the Stars Was Very Flirty With the Singer

When Simpson first appeared on Dancing With the Stars this season, his partner Witney Carson was thrilled. She asked him right off the bat if he was single and was very flirty with him throughout the season. The two were grilled by co-host Erin Andrews about their flirtation and might as well have said that Simpson and Carson should be dating. Towards the end of Simpson’s run on the show, he talked about how “distracting” Carson can be to look at during rehearsals. Was this a foreshadowing of Simpson and Hadid’s relationship coming to an end? 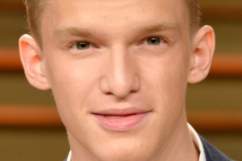 5. Hadid Seems to be Taking the Split Harder Than Simpson

"If you're feelin' too safe here beside me, And you wanna do something you might regret, Try the whole world on if you feel the need.." ❤

Gigi Hadid seems to be feeling worse than Simpson who’s been posting tweets about his new album and moving forward with life.